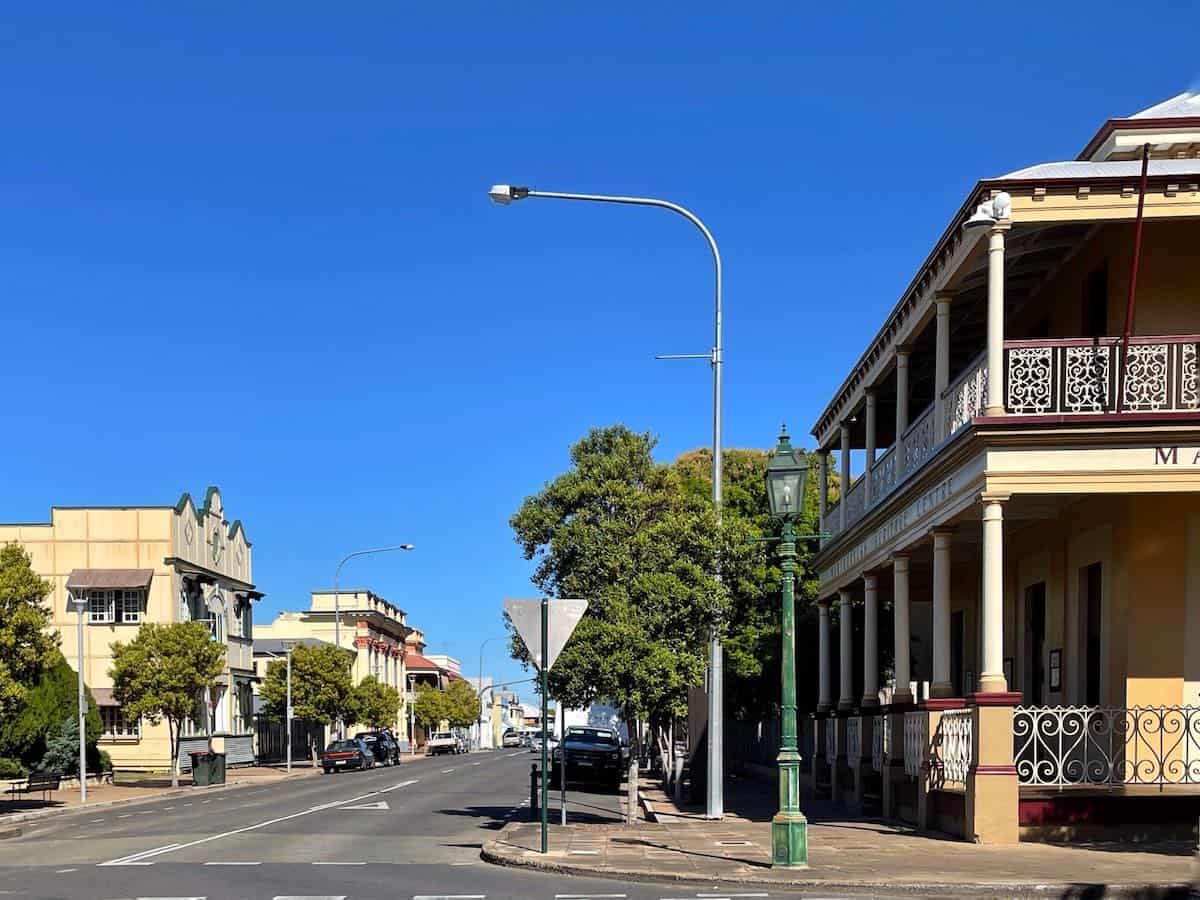 Here we look at all the best things to do in Maryborough, Queensland. From war memorials to museums, parks, galleries, markets and more, we explore them all.

Maryborough truly is one of the hidden gems of the Fraser Coast region. Often overshadowed by nearby Hervey Bay and world famous Fraser Island, Maryborough has a whole world of history and charm all to itself.

Once a bustling port and an industrial powerhouse of the region, Maryborough’s heritage buildings now play host to fascinating museums that explore the human side of Maryborough’s many contributions to history and society.

From the poignant Gallipoli to Armistice War Memorial to the whimsical and charismatic Story Bank, there is a wealth of attractions waiting for you here.

If you are planning a trip to the Fraser Coast, then be sure to set aside a day to explore this charming city. Here is our pick of all the best things to do in Maryborough.

The Gallipoli to Armistice Memorial is a poignant memorial dedicated to all the original ANZAC soldiers who lost their lives.

If you have a high school child learning about World War I history, this is the perfect place to delve into the history, hear the stories and honour the pride and courage of the original ANZACs.

The memorial is divided into two sections – the Gallipoli Campaign and the Battle of Pozieres, a brutal battle that cost more than 6,800 Australian lives.

Centred around Duncan Chapman, a Maryborough local who was the first ANZAC ashore at Gallipoli, and who lost his life in Pozieres, there are hundreds of moving stories to discover here, many told through the eyes of Queenslanders.

Click here for a more detailed look at the Gallipoli to Armistice War Memorial.

Widely recognized as the best military museum in Australia outside of the Australian War Memorial in Canberra, the Military and Colonial Museum in Maryborough is an impressive treasure trove of over 10,000 items of memorabilia.

The museum boasts the most significant collection of medals awarded for gallantry at Gallipoli in the world.

This includes a Victoria Cross awarded to Lieutenant Herbert James. It is one of only 39 Victoria Crosses awarded for the Gallipoli campaign, and the only one in Australia outside of the Australian War Memorial.

The museum is packed to the rafters with photos, letters, maps, books, artwork, certificates and more.

If you have visited or are planning to visit the Maheno on Fraser Island, you can see a model of how she looked in her days as a hospital ship.

For more recent history, keep a lookout for an original pack of the Iraqi Most Wanted playing cards deck from the Gulf War.

There is a huge amount to take in here so allow plenty of time. Two hours would probably be a good amount of time.

Once upon a time there was a baby girl called Helen Lyndon Goff who was born in a house in Maryborough. That little girl grew up to be known as P.L. Travers, and more famously as the creator of Mary Poppins.

Today her former home (and former Australian Joint Stock Bank building) has been transformed into The Story Bank, a whimsical journey through the storytelling process.

Kids will love the playful feel to the house including all the interactive elements, such as the touch screen displays, the colouring wall and the shadow puppets theatre.

Step back in time to an era when opium was legal and the rum trade was thriving at the Bond Store.

Housed in the original 1864 building, the display gives an interesting insight into Maryborough history.

There is also local port and liqueur tastings on offer in the front of the Bond Store, or book into the Friday evenings Tipples and Tales events to be entertained with historical yarns, as you sample the local tipples. (Over 18s only).

TIP: Buying a Portside Pass gives you entry to the Bond Store, The Story Bank and the Military & Colonial Museum at a discounted price.

Maryborough was once Australia’s second most important immigration port after Sydney, with more than 22,000 immigrants being processed here between 1859 and 1901.

These immigrants came from afar to take their first steps on Australian soil and start their new lives in Queensland and you can learn all their diverse and fascinating stories through words, pictures, videos and interactive displays.

Note: at the time of writing, Customs House is closed for building maintenance.

A two-kilometre trail of street artworks telling the city’s most colourful and quirky stories makes learning the history of Maryborough a fun and visual affair.

Started in 2015, the Maryborough mural trail now has a total of 37 murals that wind their way through the city’s CBD.

Start the journey at Kent Street, and pick up a map at the Visitor Information Centre, or click here for a list of the murals, and their historical significance.

Another opportunity to step back in time is this fascinating 1870s era store.

The store has been left exactly as it was when it closed its doors in 1972, after 101 years of operation. It is one of only three such stores in the world and gives an incredible insight into how much retail has changed in the past 150 years.

Kids will love exploring the shelves to discover over 100,000 items, from tins of biscuits to boxes of washing powder, sacks of flour, medicines and more.

Keep a lookout for the tea from the 1800s still in stock, and a jar of peanut butter from the early 1970s!

The original Mary Ann steam train was built in 1873 to haul logs in the Tin Can area. It was the first steam train manufactured in Queensland.

Today visitors can ride a replica of the Mary Ann around Maryborough on each Thursday, and the last Sunday of the month, between 9am and 12:30pm. Meet at the McAllister station.

There is also a small railway museum open Tuesday and Thursday mornings.

Listening to stories from a local is always the best way to get to know a city and a heritage walk in Maryborough is no different.

Maryborough Visitor Centre offers free 90-minute Heritage Tours of the city, where you can listen to local yarns as you visit historic sites with a guide dressed in period costume.

Walking tours, run every Monday, Wednesday, Thursday at 9am from Maryborough City Hall. Booking is essential.

Firing of the Time Cannon

First fired at 1pm on 21st March 1878, the Time Cannon continued to set the time for the Maryborough population every day at 1pm until 1890.

The original cannon is now stored in the Bond Store but a replica is fired every Thursday by the Town Crier for tourists. You can witness the firing of the historic time cannon at 11am at Customs House and 1pm at City Hall.

Fun Fact: The Maryborough Time Cannon is believed to be the inspiration for Admiral Boom’s cannon in Mary Poppins.

If you love street markets then try to arrange your visit to Maryborough for a Thursday.

Every week from 7am to 12pm, Adelaide Street in the city centre comes to life with market stalls, live music, food stalls and a crowd of market goers.

From fresh local produce, to crafts, pot plants, food items, clothing and more, there’s a great buzz around Maryborough on a Thursday.

Market day also coincides with the firing of the time cannon and the running of the Mary Ann steam train.

Gatakers ArtSpace is set within historic warehouses dating back to 1869 and believed to be among the oldest buildings in Maryborough.

An art gallery since 2010, it has four gallery spaces that play host to an ever-changing series of exhibitions from both local and visiting artists. You can expect a diverse collection of art forms and styles and there is always something interesting on display.

Bordering the Mary River, Queen’s Park was gazetted as a botanical gardens reserve in 1873, and many of the beautiful trees seen today in Queens Park were planted prior to 1900.

The park is the perfect peaceful retreat to escape to for a family picnic or to let the kids run around and let off steam.

The Mary Ann steam train runs through here on a Thursday and the last Sunday of the month, running along railway tracks that originally linked the station with the port.

The last Sunday of the month also sees the arrival of miniature steam engines that kids can hop aboard, as part of MELSA’s Sunday in the Park celebrations.

Maryborough is a 30-minute drive from Hervey Bay and a 3-hour drive north of Brisbane.

Hervey Bay airport has direct flights from both Sydney (with Jetstar) Brisbane (with Qantas).

The Gallipoli to Armistice Memorial Maryborough