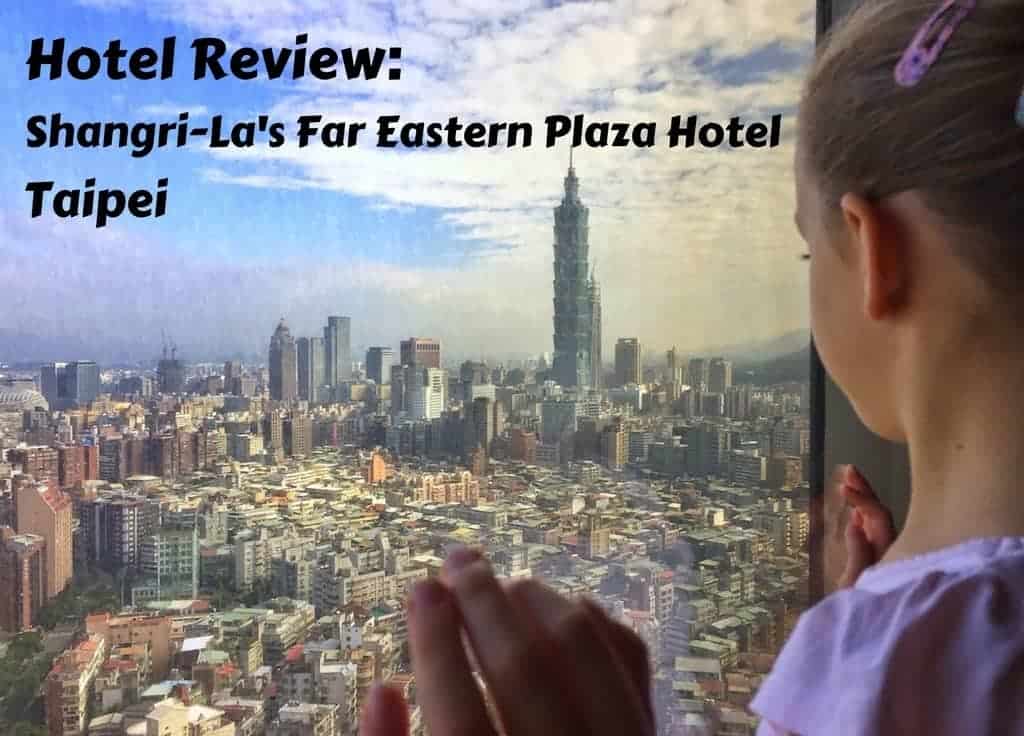 Shangri-La’s Far Eastern Plaza Hotel, Taipei is a luxury city centre hotel in Taipei. As the tallest hotel in the city this family hotel in Taipei offers unparalleled views over the city, including wonderful views of the famous Taipei 101 tower.

The 420 rooms of this family friendly Taipei hotel are beautifully decorated in an East-meets-West fusion style and all boast superb views of the city. This luxury hotel in Taipei has a wide range of restaurants to choose from, and two swimming pools, including a fabulous year-round heated roof-top swimming pool, with panoramic views of Taipei.

There are 420 rooms in Shangri-La’s Far Eastern Plaza Hotel, Taipei, including 37 suites, all featuring modern décor blended with traditional Sung dynasty touches. Our room for our two-day stay in Taipei was a Premier King Bed room on the 31st floor. 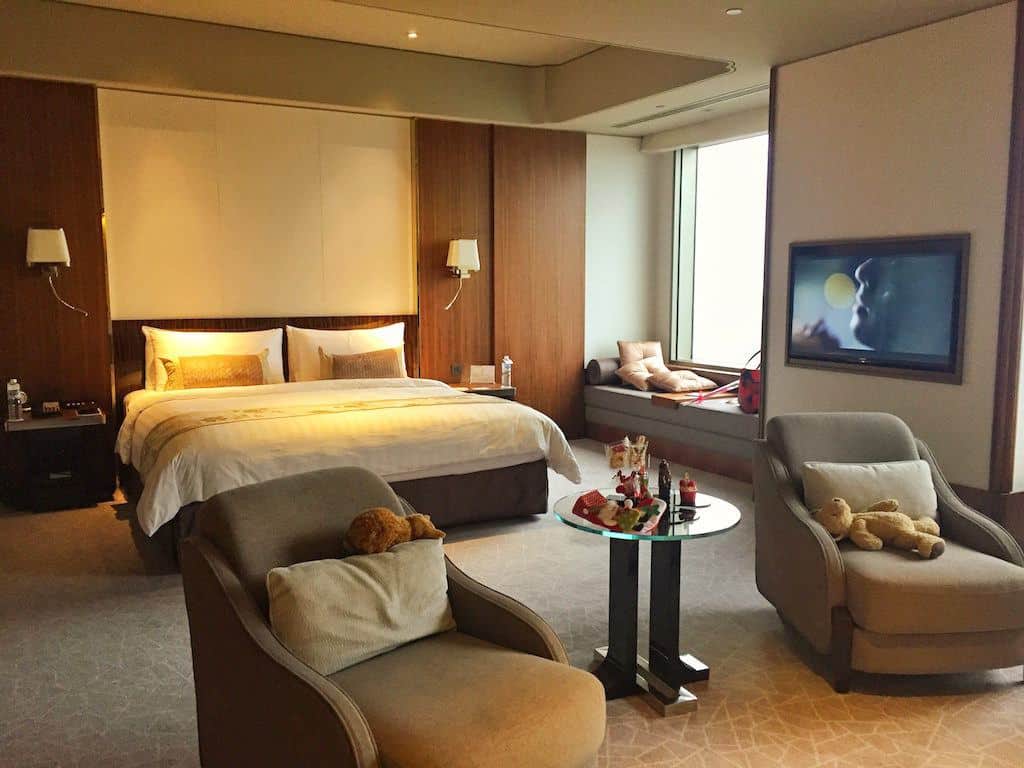 The first thing that struck us as we walked through the door of our room, was the sensational view through the large picture windows, including a clear view of the Taipei 101. We particularly loved the window seat that allows you to sit and admire the view, and the positioning of the desk to make the most of the view. I would be quite happy to sit at my desk all day with a view like that! The large windows also meant there was plenty of natural light in the room during the day.

Our room featured a huge comfy bed, and a sofa bed had been made up for the kids. This was plenty big enough for both my kids to share comfortably. There was a large TV that could be turned to be watched from either the bed or the seating area, which included a sofa (turned into a bed) and two armchairs, plus coffee table. 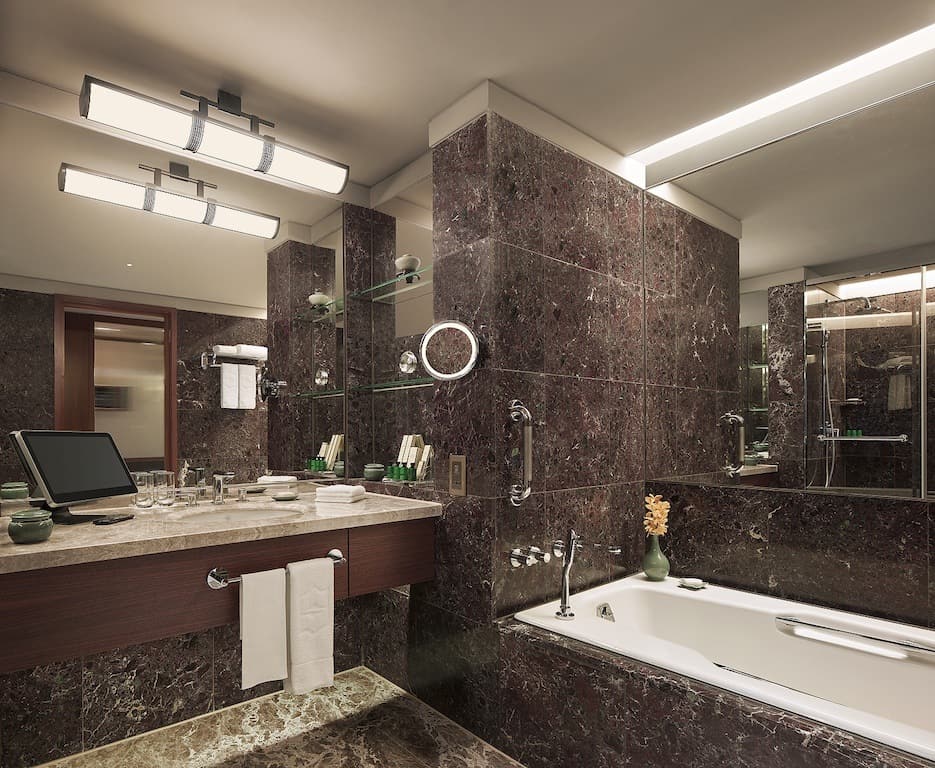 The bathroom was spacious, with a gorgeous rain shower and separate bath and a TV – which always get our kids excited! We also loved that they had provided separate bath amenities for the kids – children’s shampoo, bath wash and lotion.

The highlight of Shangri-La’s Far Eastern Plaza Hotel, Taipei is the rooftop swimming pool. This fabulous swimming pool is heated, making it accessible year-round and it offers superb panoramic views of Taipei. Strategically placed sun loungers make the most of the view, so you can relax with a view while the kids splash around. A second swimming pool is located on the 7th floor and is open during the summer months. 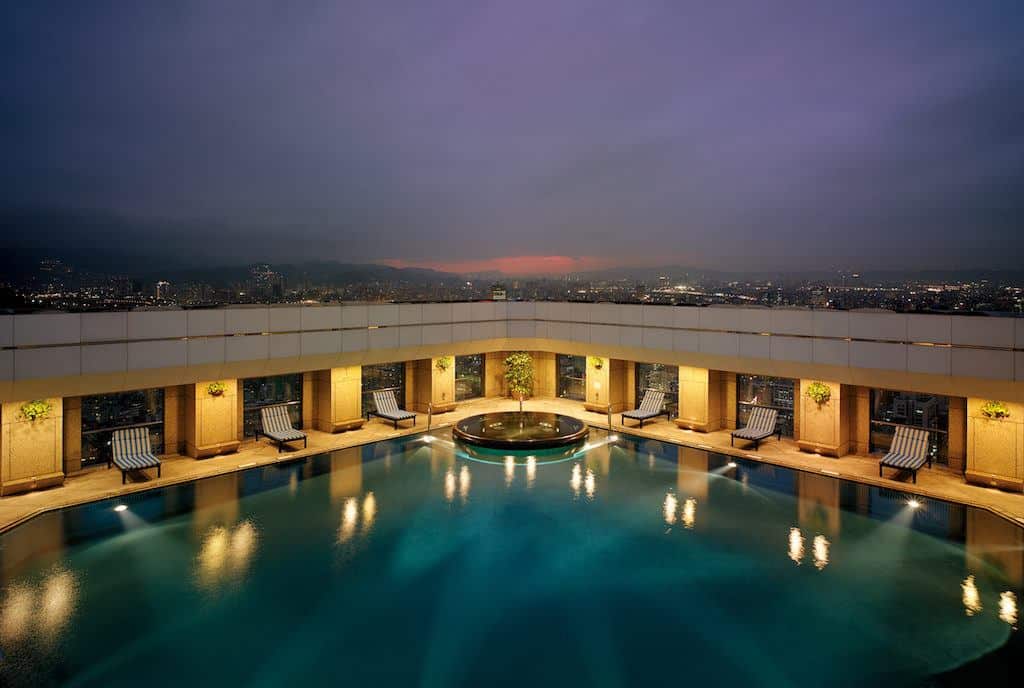 There is also a well-equipped gym with on-site personal trainers, a timetable of classes and relaxation facilities such as sauna, steam rooms and Jacuzzi.

Unfortunately I didn’t have time to indulge in a spa treatment at the Qi Shiseido Salon & Spa, but I did have a peek at its menu of heavenly sounding massages and facials, such as the Earthly Thermal Energy – Hot Stone Deep Body Massage. The spa boasts five treatment rooms, a hair salon, nail salon and six private spa suites, each with marble bathtub, personal sauna, steam room and shower room.

There are five restaurants and three bars/lounges at Shangri-La’s Far Eastern Plaza Hotel, Taipei. On arrival at the hotel we enjoyed a delicious lunch at the stylish Marco Polo Restaurant. Here we took in the fabulous Taipei city views as we indulged in the antipasti buffet and beautifully prepared fresh pasta dishes. Despite the stylish surroundings of the Marco Polo Restaurant, they were welcoming of the children, and provided a kids menu, high chairs and kids’ plates and cutlery. 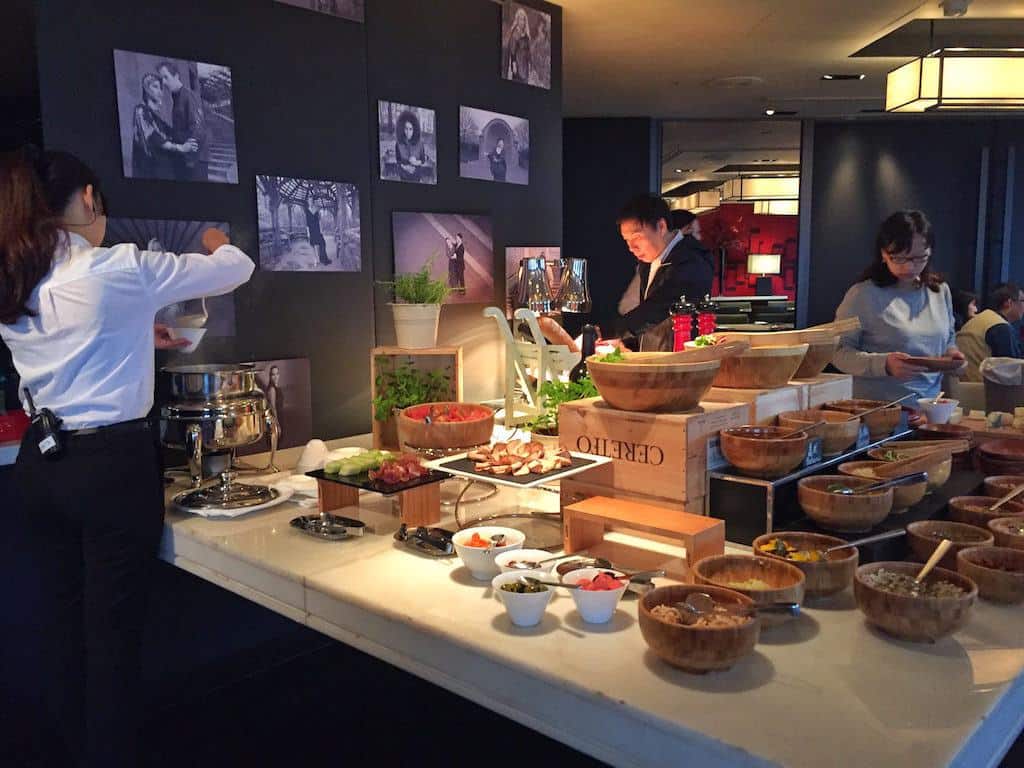 Other restaurants in this family friendly Taipei hotel included the Shang Palace, an elegant Chinese restaurant serving Cantonese favourites, Shanghai Pavilion for fine-dining Shanghainese cuisine (Bill Clinton dined here in 2004), and ibuki by Takagi Kazuo, a modern and minimalist Japanese restaurant under the watchful eye of 2-Michelin star chef Takagi from Kyoto. Here you can enjoy refined Kyoto cuisine, or choose to indulge in a feast at one of the teppanyaki stations or sushi bar. 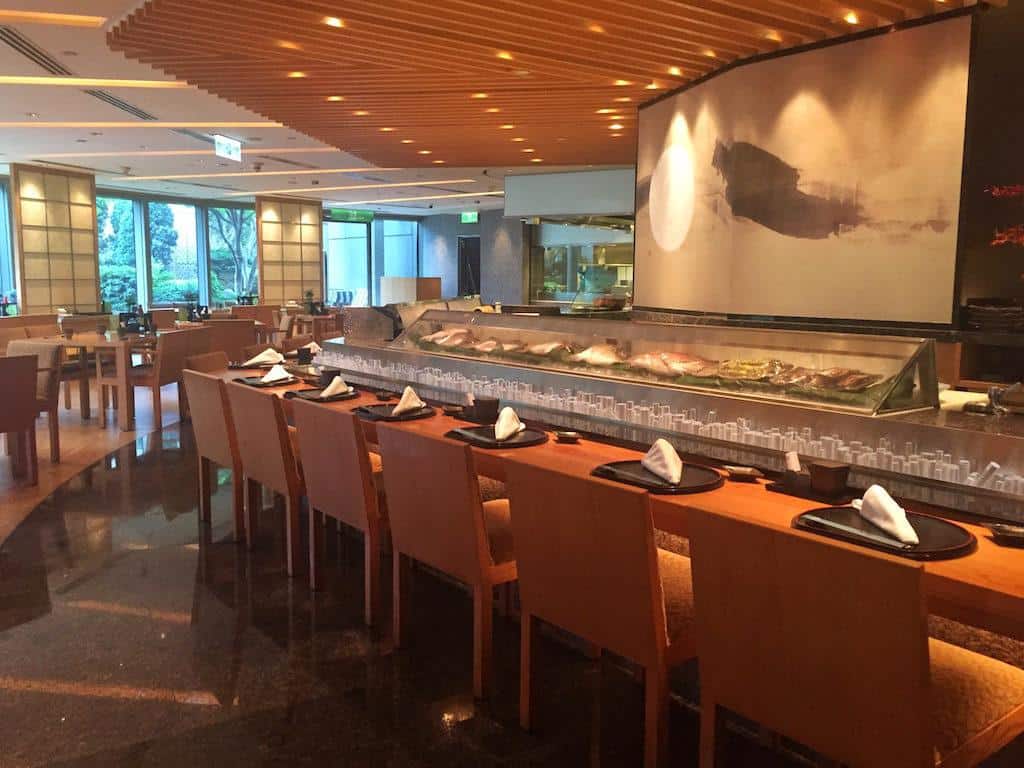 We enjoyed breakfast every morning at the Café at Far Eastern. This is the hotel’s buffet restaurant that Shangri-La is so well renowned for. In true Shangri-La style, a huge spread is on offer for breakfast every morning, including a wide range of Western and Asian cuisine – from pastries, cereals, salads, cold cuts and fruits to dim sum, noodle soups, roasted meats, Taiwanese specialties and egg station. 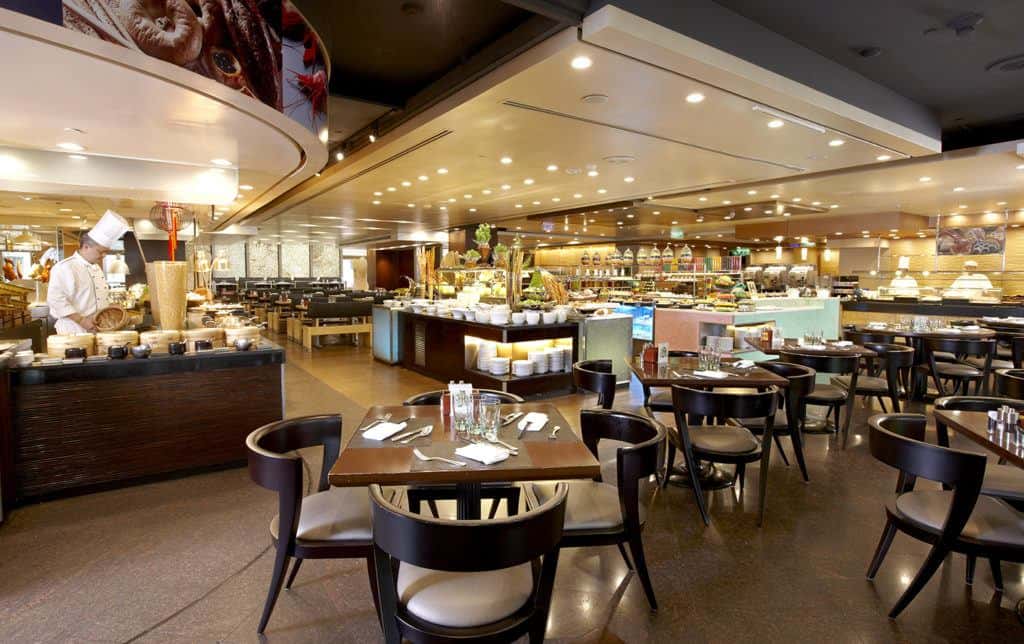 There are three bars to choose from at Shangri-La’s Far Eastern Plaza Hotel, Taipei. At the stylish Marco Polo Lounge, you can enjoy afternoon tea and evening cocktails with a view, with DJs playing every Friday and Saturday night. The LI Bai Lounge enjoys a more relaxed and traditional atmosphere, with live lounge music most evenings. 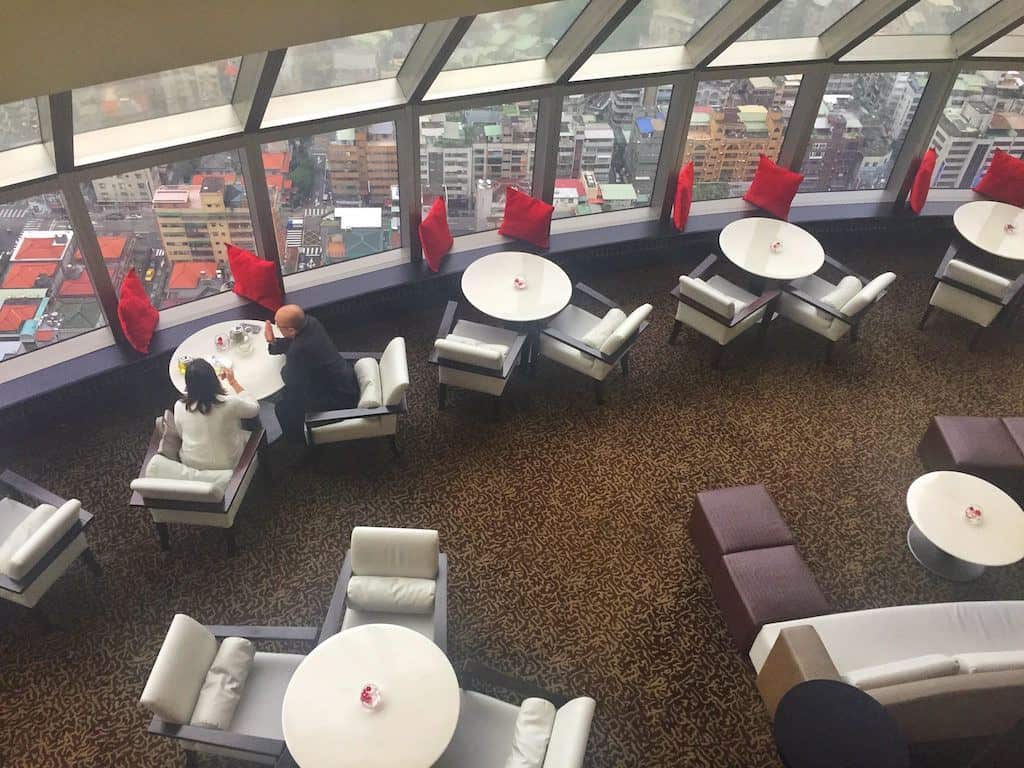 The Lobby Court is a popular spot for afternoon tea with live piano performances. We particularly took to the Lobby Court when we discovered it featured the only gin bar in Taipei, featuring over 30 gins from 10 different cities around the world. A generous happy hour on gin kept us coming back every evening to try a new one!

Another special addition to Shangri-La’s Far Eastern Plaza Hotel, Taipei food & beverage portfolio is The Cake Room. This specialty shop situated just off the lobby is brimming with tempting treats, including pastries, cakes, chocolates and sweets. As we were there over the Christmas period, the entire cake shop had been transformed into a giant gingerbread house, with the walls covered with decorated gingerbread bricks and sweet treats. The smell was incredible!

Shangri-La’s Far Eastern Plaza Hotel, Taipei is well located for sightseeing. We took taxis most places, and there were always plenty of taxis waiting outside the hotel. Taipei 101 is just a 10-minute ride away (you could walk there in around 20 minutes), and the Chiang Kai-shek Memorial Hall was less than 15 minutes in a taxi. There is a MRT (subway) station just up the road, about 5 minutes walk away. There is also a shopping mall linked to the hotel, with a  supermarket in the basement and a Mothercare store across the road. 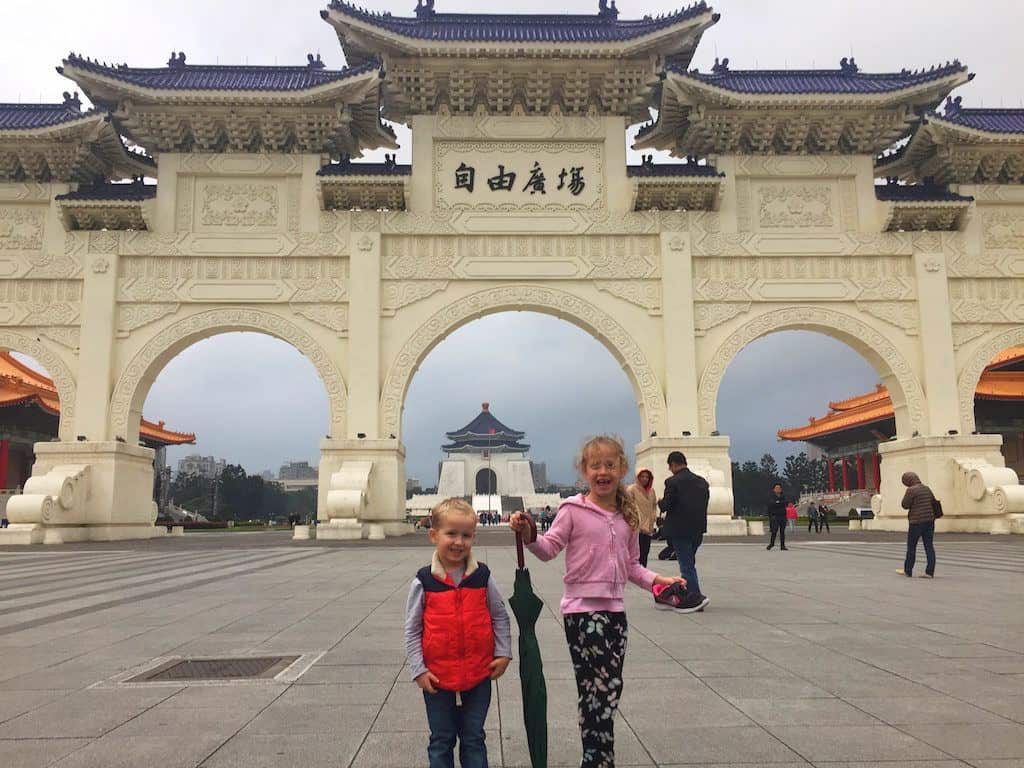 Taipei is a really fun city to explore, and very easy with kids. We found taxi drivers helpful and friendly and restaurants welcoming to families. We had a lot of fun exploring during our 48 hours in Taipei with kids. We visited the Taipei Zoo, took the Maokong Gondola up to the tea plantations for lunch at the Yao Yue Teahouse, went up the Taipei 101 to admire the city views and visited the impressive Chiang Kai-shek Memorial Hall.

We also fulfilled a long-term ambition to enjoy dumplings at the original Din Tai Fung restaurant, and took a fantastic street food tour with Taipei Eats. We also loved exploring the famous Taipei night markets for some evening shopping and street eats.

Shangri-La’s Far Eastern Plaza Hotel, Taipei is a beautiful hotel and is a great choice if you are visiting Taipei with kids. It is very convenient for exploring the city. The staff were hugely welcoming (our kids were particularly excited to be greeted with marshmallow lollipops!), we loved the wide range of restaurants and bars and the rooftop pool is spectacular. Our room was a great size for a family and the views were sensational.

As we were visiting in December, the hotel was all decked out for Christmas, with a stunning Christmas tree on every floor, welcoming decorations in the lobby and Christmas carols played on the piano. It was the most festive we felt all season! I would definitely recommend Shangri-La’s Far Eastern Plaza Hotel, Taipei  if you are planning a trip to Taipei with kids. 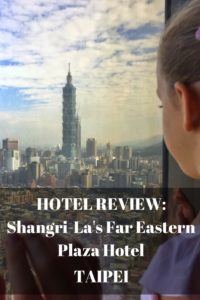 Note: Mum on the Move were guests of Shangri-La during our stay at Shangri-La’s Far Eastern Plaza Hotel. This in no way affected my review, and as always all opinions are honest, and my own.

Our Family Travel Highlights of 2016

Things to do in Inle Lake with Kids 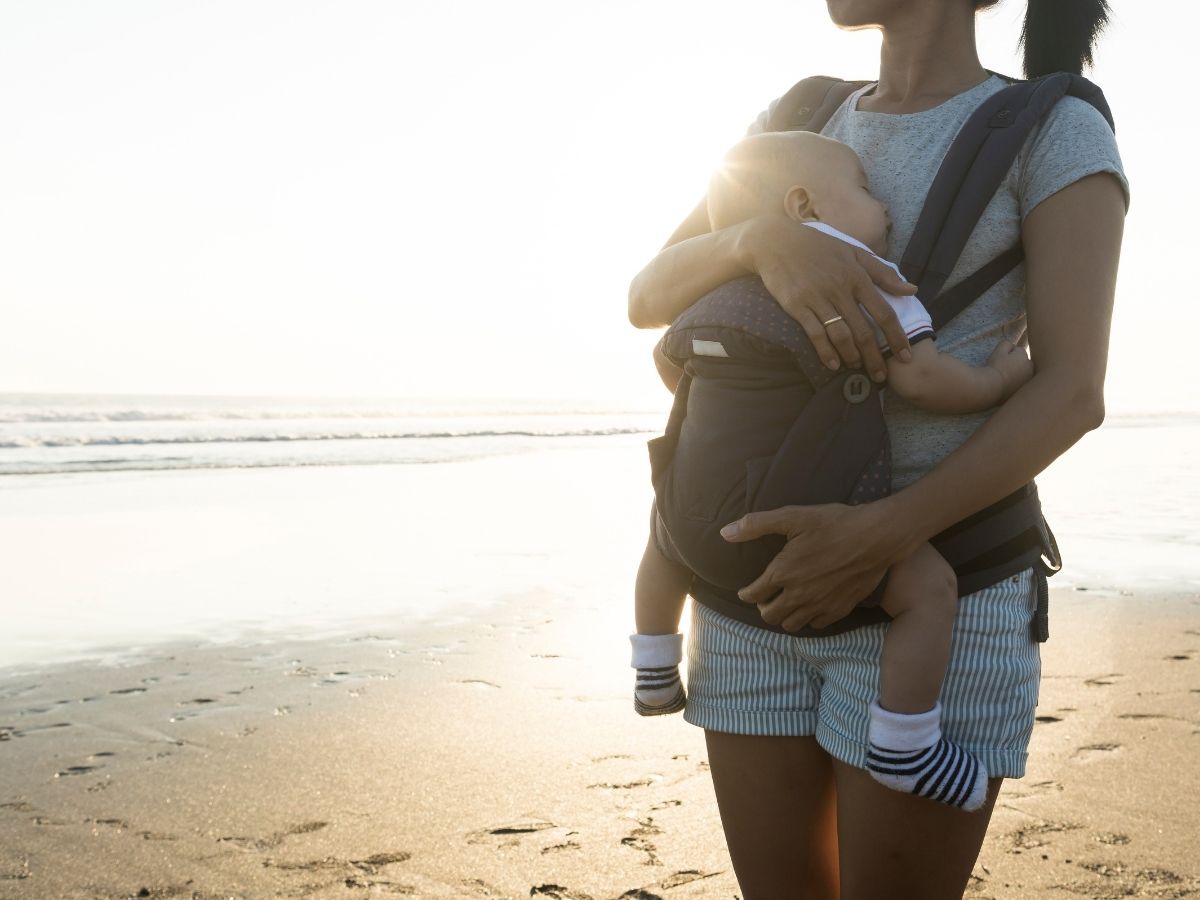 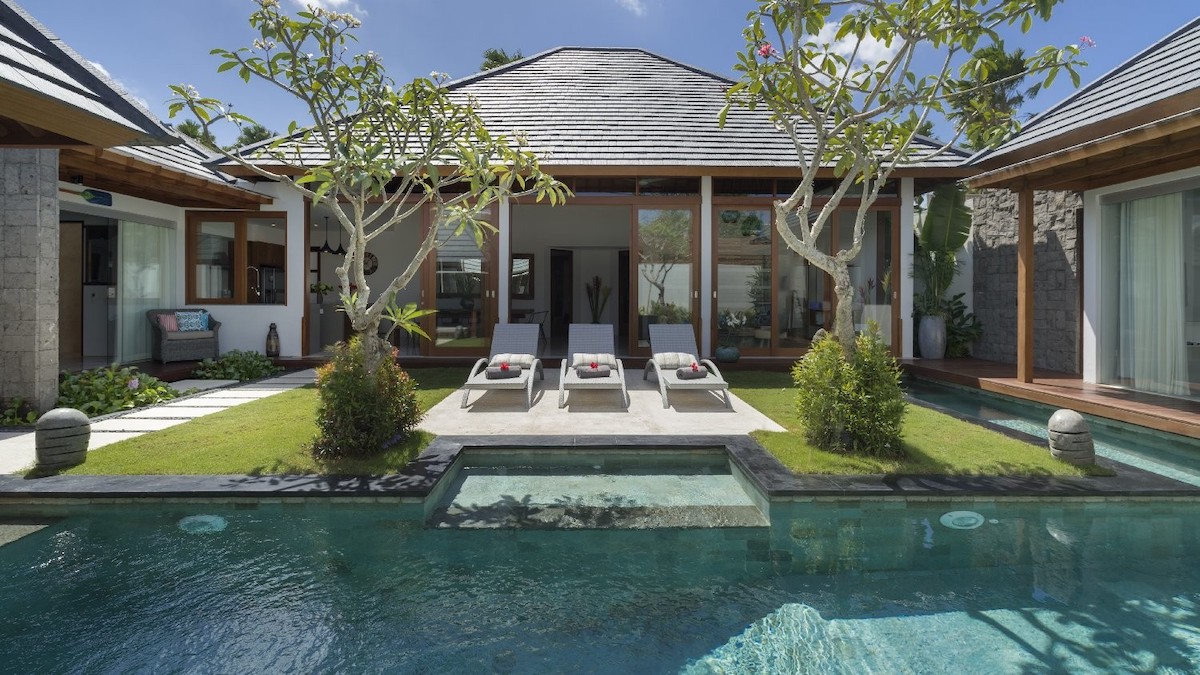 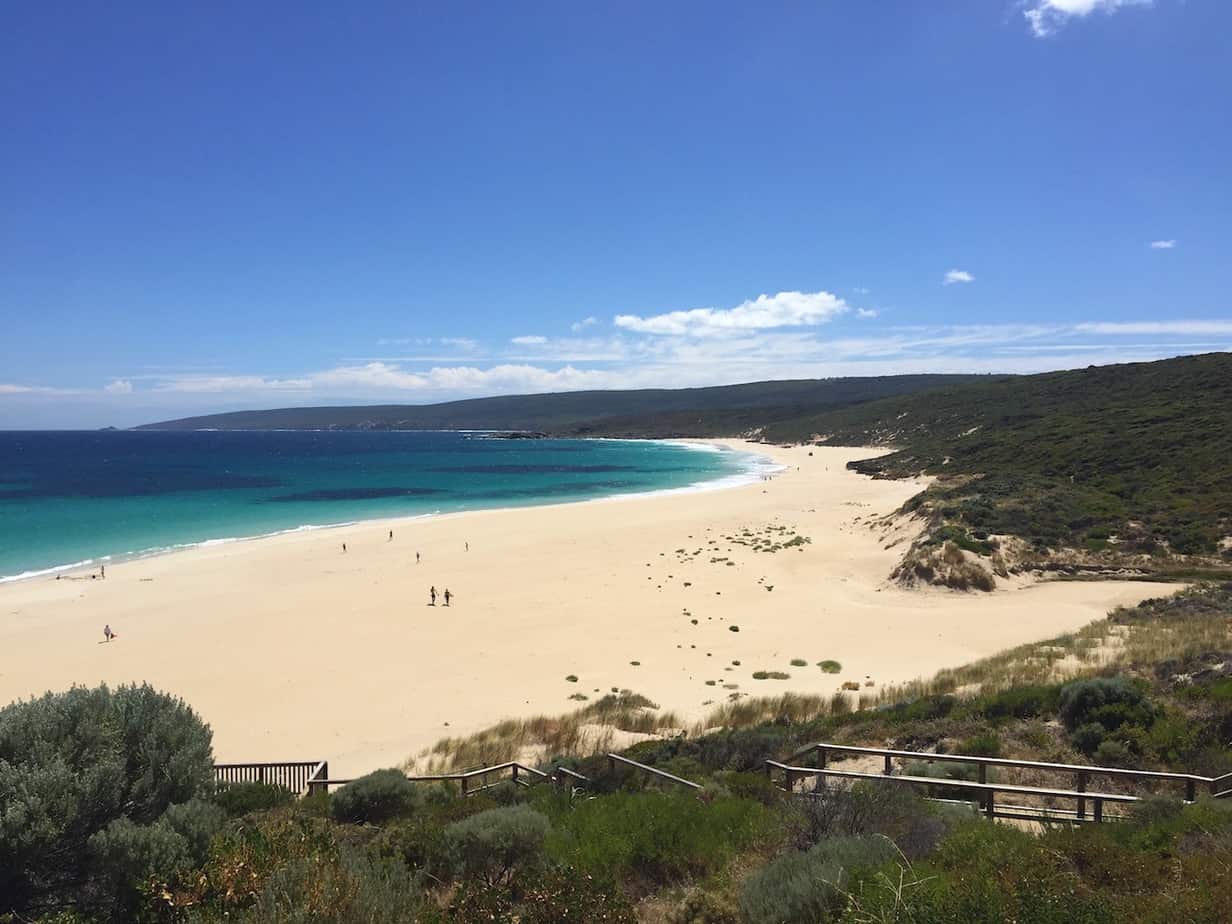